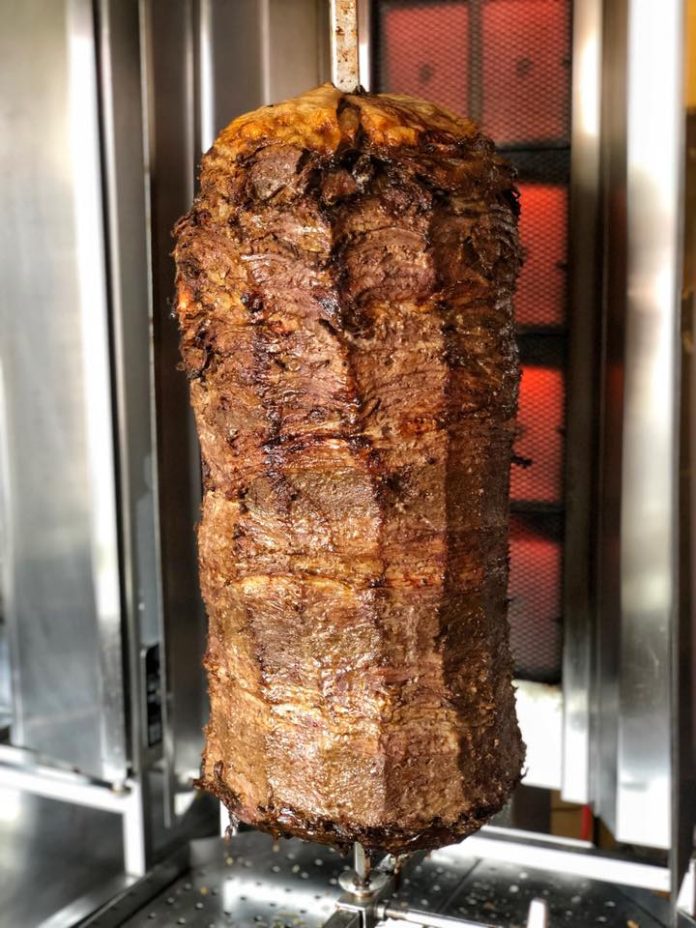 Grilling a vertical spit of stacked meat slices and cutting it off as it cooks was developed in Bursa in the 19th century Ottoman Empire, and called doner kebab (Turkish: döner kebap). Following World War II, doner kebab made with lamb was present in Athens, introduced by immigrants from Anatolia and the Middle East. A distinct Greek variation developed, often made with pork and served with tzatziki sauce, which later became known as gyros.

By 1970, gyros wrapped sandwiches were already a popular fast food in Athens, as well as in Chicago and New York City. At that time, although vertical rotisseries were starting to be mass-produced in the US by Gyros Inc. of Chicago, the stacks of meat were still hand-made. According to Margaret Garlic, it was she who first came up with the idea to mass-produce gyros meat cones, after watching a demonstration by a Greek restaurant owner carving gyros on the What’s My Line? television show. She convinced her husband John Garlic, a Jewish former Marine and then Cadillac salesman, of the idea. After obtaining a recipe from a Greek chef in Chicago, the couple rented a space in a sausage plant in Milwaukee and began operating the world’s first assembly line producing gyros meat from beef and lamb trimmings. The Garlics later sold their business to Gyros Inc., which along with Central Gyros Wholesale, and Kronos Foods, Inc, also of Chicago, began large-scale production in the mid-1970s.

The name comes from the Greek γύρος (“circle” or “turn”), and is a calque of the Turkish word döner, from dönmek, also meaning “turn”. It was originally called ντονέρ (pronounced [doˈner]) in Greece. The word ντονέρ was criticized in mid-1970s Greece for being Turkish. The word gyro or gyros was already in use in English by at least 1970, and along with γύρος in Greek, eventually came to replace doner kebab for the Greek version of the dish. Some Greek restaurants in the US, such as the Syntagma Square in New York City—which can be seen briefly in the 1976 film Taxi Driver—continued to use both doner kebab and gyros to refer to the same dish, in the 1970s. In contrast to other areas of Greece, in Athens, the skewered meat dish souvlaki is known as kalamaki, while souvlaki is a term used generally for gyros, kalamaki, and similar dishes. The Greek pronunciation is [ˈʝiros], but the pronunciation in English is often /ˈdʒaɪroʊ/ or, occasionally /ˈɡɪəroʊ/ or /ˈjɪəroʊ/.