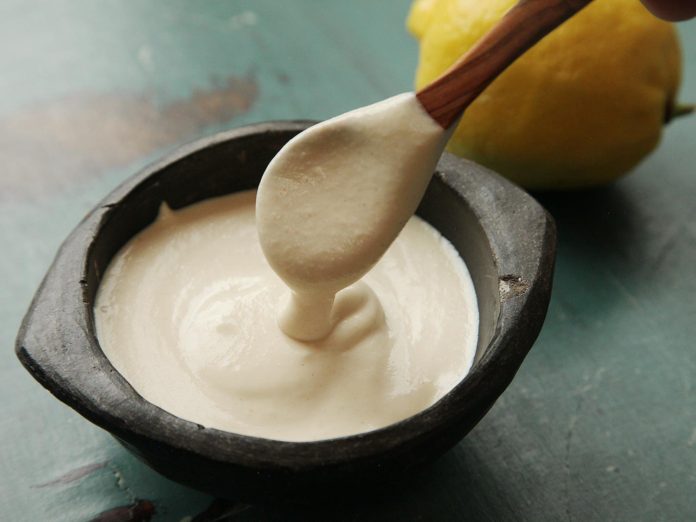 Tahini Sauce, called “tahina” in some countries, appears prolifically in the cuisines of the Mediterranean and the Middle East; the earliest known mention of it dates back to 3500 BC. A paste made from ground sesame seeds, it’s often blended into classic dips, such as hummus and baba ghanoush. Tahini-based sauces appear widely in Armenian, Turkish, Iraqi, Cypriot, Greek, East Asian, and Indian fare. Creative cooks worldwide recognize the versatility of this simple but flavorful and nutritious ingredient.

How to Use Tahini

You can eat good tahini right from the jar, but it might be best enjoyed in a classic manner as the main ingredient in hummus. Or more adventurously, drizzled over fruit, swirled into cheesecake, or as a marinade for chicken or lamb. In Israel, residents and tourists ladle an herbaceous tahini sauce over pitas packed with falafel; it’s also a favorite topping for vegetables and sometimes even fries. You can stir it into a soup to add non-dairy creaminess, use it to thicken a smoothie, or simply spread it on toast. Or make a versatile tahini sauce by combining it with lemon juice, olive oil, and seasonings to create a spread for sandwiches. A marinade for meats, or a simple dip for vegetables.

Tahini resembles natural peanut butter in appearance, but it’s not inherently sweet like nut butter. It has the earthy, nutty flavor of sesame seeds but with a tinge of bitterness (although if it tastes unpleasant or astringent, it’s past its prime). Tahini Sauce made from roasted sesame seeds generally tastes milder than tahini made from raw or unhulled seeds
Varieties

Most common brands of tahini use hulled white sesame seeds, either raw or toasted. Choose this lighter variety for dishes that highlight just a few quality ingredients. Such as with a salad or to stir into a sauce for drizzling. Darker varieties come from either black sesame seeds or toasted white sesame seeds with the hull intact. They tend to taste a little more bitter and aren’t as smooth. But the more robust flavor works well in sweet baked goods.